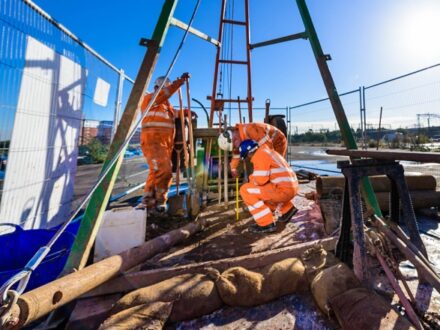 HS2 Ltd has received local authority approval to build a third viaduct across the Digbeth canal as part of the Curzon Street station site in Birmingham.

Balfour Beatty Vinci (BBVJV) will be the contractor on the job, which received the go-ahead from Birmingham City Council’s planning committee yesterday.

Three viaducts will be constructed on the Curzon Street site, which was waiting on the approval of designs for the third one, located closest to the station.

The new proposal included changes in design, such as the reduction of the width of the structure from 71 metres to 65 metres, and an alteration to its curvature. The Curzon 3 viaduct, which was approved, will open into four decks near the station.

Tweaks include the scrapping of the Curzon Street pumping station. It will be replaced by an attenuation pond or tank, which will store excess water that gathers on the viaduct, allowing it to be released in a controlled manner.

The three viaducts will be built on inverted steel piers, as opposed to the V-shaped piers in the original design, which serves as a tribute to the heritage of canal-side cranes in Birmingham. It will also save space underneath for more public area.

This follows concern that the concrete platform or plinth could create run-off into the surrounding canals.

HS2 planning manager for Birmingham City Council Victoria Chadaway recommended the proposals for approval, which were voted on by the planning committee yesterday.

A HS2 spokesperson said the planning approval was a significant win for the rail project. “Our design refinements bring a range of benefits, including reducing the construction time and materials, resulting in reduced carbon.”