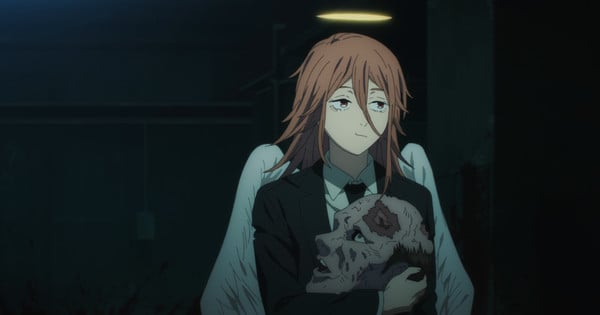 How would you rate episode 11 of

It says a lot about the quality of Chainsaw Man’s general tone and pacing that we can get an episode like “Mission Start,” which is the closest the show has come to giving us a typically exposition-heavy, table setting kind of story, and it is still chock full of the gory fun and cinematic fervor that the series has become known for. If you look at it on a purely technical level, not a whole lot happens this week: Aki makes a contract with the Future Devil (which is technically an event that already got started last week); Denji and Power conclude their recent round of training and get the lowdown on the latest mission to take out Katana Man (aka “Samurai Sword”) and his goons; Makima has a meeting with the mafia; we meet a bunch of new fiends that work for the Safety Division; and, finally, Aki gets into a fight with a familiar foe. There are a lot of moving parts, sure. Still, they’re all in service of setting up the real focus of the story, which is the assault on Katana Man’s zombie-ridden hideout that is going to play out in the upcoming season finale; there isn’t a whole lot of room this week for interesting character development, gripping drama, or slam-bang action.

And yet, as they say, life finds a way, and Chainsaw Man has once again managed to squeeze out pretty much every drop of satisfying dramatic potential from its source material. Is this the best episode of CSM ever? No, but it’s the kind of episode that, in many other anime, would have been more than happy to coast on the success of its predecessors and get a bunch of “boring” stuff out of the way so that the crew could put all of their time and attention to work on the finale. Thanks to the consistently incredible work that MAPPA has been doing to animate this thing, though, the closest thing we get to “boring” this week is maybe the one scene where Katana Man and Sawatari have to do their mobster-y scheming and lay out their plan to wipe out the Safety Division with an army of zombies that they’ve got hiding in the basement. You’re in a pretty good place as an anime when your episode’s weakest scene involves casually dumping dozens of zombies into an ongoing war against all sorts of freaks and weirdos with evil Devil powers.

Plus, as everyone has learned by now, the true secret sauce in the Chainsaw Man recipe is the fact that its quiet, dialogue-heavy scenes are usually just as, if not more compelling as the Chainsaw-Goes-Brrrrrrrr splatterfest stuff. Kishibe was already winning us over with his deadpan personality and hardcore training tactics, but you know what really proves he’s a badass? He can sit down with Makima and causally accuse her of being a self-serving liar, despite everything we know she’s capable of.

Similarly, while Makima has already done plenty to reveal the bottomless depths of her ruthless and cunning nature, you know what really proves that she is 100% not to be fucked with? I don’t know, maybe the way she casually saunters into a room filled with murderous yakuza and demands access to all of the info they have on the Gun Devil by showing them a paper bag filled with the freshly scooped eyeballs of their loved ones? Yeah. She didn’t even need to start melting people’s brains with that spooky gaze of hers to make the point; that was just Makima showing off.

Speaking of showing off, you know that Tatsuki Fujimoto (and, by extension, the MAPPA crew) was just having a goddamned ball introducing the new batch of Fiends n’ Devils that have arrived to help out Denji and Co. for the Katana Man mission. The Violence Fiend is a badass weirdo who punches shit real good; the Spider Devil is a Hot-Topic Goth Queen Weirdo who rips shit up with her spider legs real good; and the Angel Devil is a perfectly innocuous Good Boy who, I don’t know, sucks the essence of life itself from the flesh of his enemies real good? Shark Fiend is there, too, I guess.

We don’t talk about Shark Fiend in this house.

Point being, I was fully expecting “Mission Start” to end at, well, the start of the mission and to leave all of the good stuff for next week. Thankfully, not only do we get to watch the new gang of idiots wreck house in a satisfying way, our boy Aki gets to continue his “Secretly The Most Badass Character in All of Chainsaw Man” hot streak when he and his new pal Future Devil have to take on Himeno’s former ally, the Ghost Devil. This fight is awesome to behold, with the animators perfectly catching the weighty and awkward movement that Aki has to manage to land his hits in such a cramped and hostile environment. The action is bolstered by the dark and fatalistic undertones of the fight; Aki already knows he’s got two years left to live if he’s lucky, and when you see him getting throttled by the Ghost Devil, it’s clear that he wasn’t just playing cool when he told Future Devil that he doesn’t care about when or how he’ll die. He’s already throwing away his life every time he returns to the battlefield.

It’s that potent mix of dumb, violent spectacle and sharp human pathos that Chainsaw Man gets so right, and it’s what makes even this (relatively) low-key chapter of the Chainsaw-ga such a delight. I don’t know what emotion to prioritize going into next week’s finale? Do I get hyped at the awesome climax that is sure to come? Do I get sad knowing that this insanely wonderful season of television is coming to an end? Do I get bitter and disenfranchised, knowing that it will be who knows how long until we get our second season?

You know what? Maybe I’ll be best off if I take the Denji approach to things and say, “Screw it! That stuff is depressing to think about!” Let’s revel in the chainsaw goodness while we’ve got it and enjoy some artery-clogging Super Toast in honor of Denji, He Who Rips Most Heinously and Tears Most Bodaciously. Next week, it’ll be his turn in the spotlight, and he wouldn’t want us to tune in on an empty stomach, now would he?

• Power’s Playlist I wasn’t sure about the new ending theme from Queen Bee, “Violence,” but after a few listens, the song has grown on me. The same goes for the abstract CGI visuals; at first, I thought they were a bit too cold and sterile, but I think they work well as a mood piece, albeit one that is very different from, say, the chaotic energy of last week’s ED. Solid stuff, overall.

• Kids Say the Denji-est Things! I’m tempted to give Line of the Week to Future Devil, of all characters, if only because his demented refrain of ”Mirai saikouuuuuuu” (“The future rules!”) has been stuck in my head on repeat for days, now. Plus, he does that goofy-ass little dance when Aki sticks his head into Future Devil’s gaping chest-eyeball-vagina thing. Runner-up can go to Kobeni, who once again embodies Big Mood energy with her pitiful cry of “I hate this.” In the face of Denji and Power’s…well, everything about them, really.

• Sound off in the comments, people: What is the weirdly specific concept-turned-Devil that you would want to be in a battle against a vicious zombie horde? I think my Fiend-sona would have to be Public Speaking Devil, who in my head-canon is, like, a giant, anthropomorphic microphone in a snazzy suit that forces his enemies to give an impromptu speech on current events, lest they explode from the inside out or something. Everyone knows that zombies suck at public speaking. Suck it, undead yakuza!

James is a writer with many thoughts and feelings about anime and other pop-culture, which can also be found on Twitter, his blog, and his podcast.