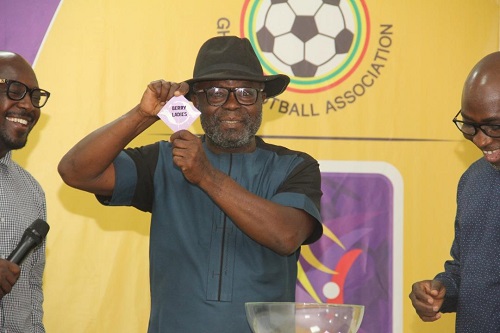 Defending champions of the Women’s FA Cup Ampem Darkoa Ladies have been drawn against fellow premier league side Candy Soccer Academy in the Round of 64 stage of this year’s competition.

The draw, held at the offices of the Ghana Football Association (GFA) yesterday, saw Ampem Dar­koa – who defeated former champi­ons Hasaacas Ladies 1-0 at the Baba Yara Stadium last June, begin the 2022/23 journey away at the Ohene Ameyaw Park in Dormaa next week between January 13 and 23.

The Northern Zone clash is set to afford the host, who joined the elite division this season, an oppor­tunity to atone for their loss in the league.

Former champions Prisons La­dies will come up against Division One side Fosu Royal Ladies, while Tamale Timtooni Ladies take on Pearlpia Ladies in an all-Tamale affair at the Aliu Mahama Stadium.

In the Southern Zone, another all-Premier League affair will be wit­nessed at the Carl Reindorff Park where Faith Ladies welcome Berry Ladies.

Dethroned champions, Hasaacas Ladies will host to Fiase Golden Royals at the Sekondi Gyandu Park, while Division One side, Jonina Ladies slug it out with Army Ladies.

Halifax Queens and Thunder Queens will clash in the Queens’ battle, while Blessed Ladies lock horns with FC Epihany Warriors for a place in the next round

Can Kotoku Royals bounce back against Berekum Chelsea today?

Galaxies arrive  in Algiers  for next  phase of pre-tournament

‘World Cup 2026 another boost for US Major League Soccer’