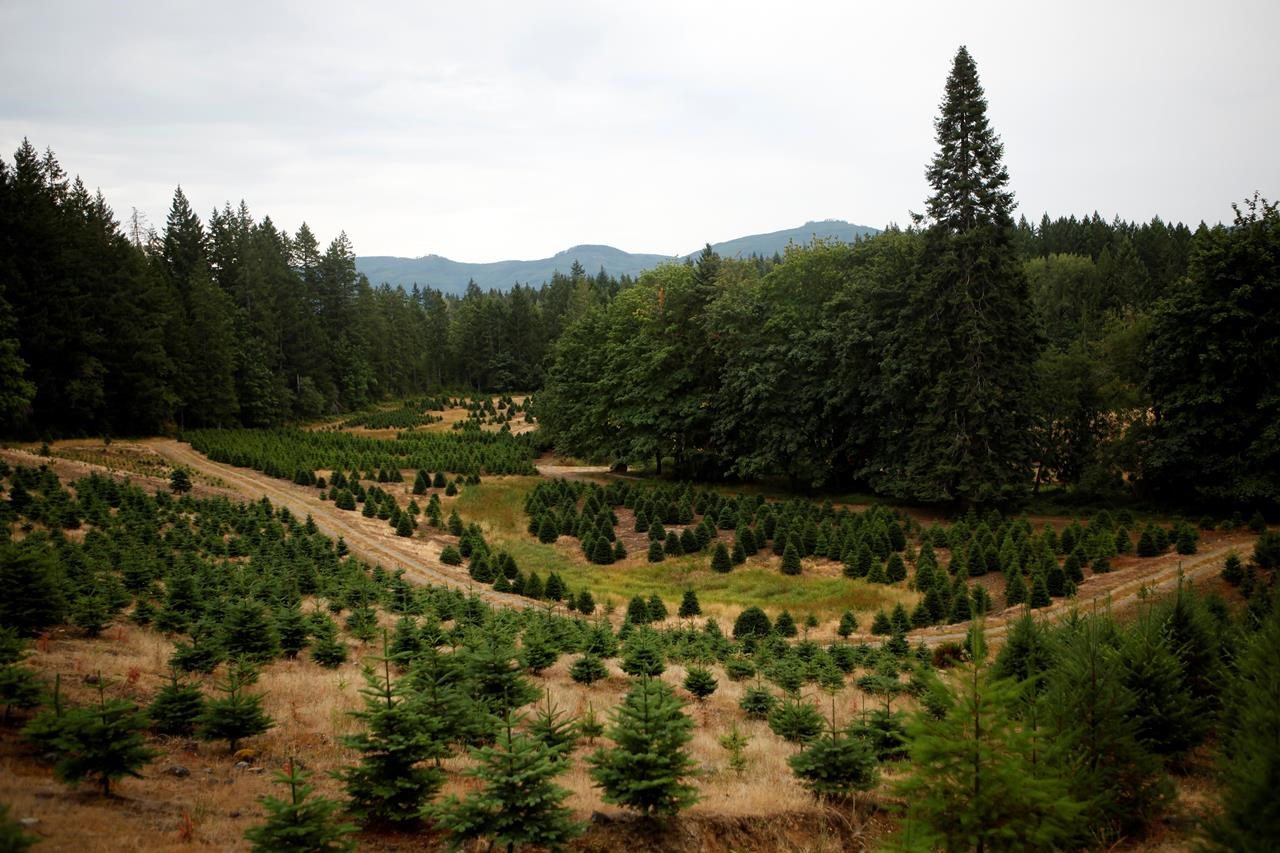 VANCOUVER – The effects of climate change are taking a toll on Christmas tree farms across Canada, with one forestry expert and the head of the Canadian Christmas Tree Association saying the sector that’s already undergoing shifts will need to adapt.

The festive trees take eight to 12 years to reach the size most people look for, and young seedlings are particularly vulnerable to climate risks, said Richard Hamelin, head of the forest conservation sciences department at the University of B.C.

Much of the province has experienced prolonged drought and extreme heat over the last two summers, and the seedlings have shallow root systems that don’t reach beyond the very dry layers of soil near the surface, Hamelin explained.

Meanwhile, their older counterparts may survive but lose their needles or turn brown as a result of extreme heat and drought, he said in an interview.

Seedlings and their shallow roots are also at risk of being inundated during flooding, while wet, cool soils increase the risk of root diseases, Hamelin noted.

Record-breaking atmospheric rivers of rain caused extensive flooding throughout southwestern B.C. in November 2021, but Shirley Brennan, the executive director of the Canadian Christmas Trees Association, said farmers in the province reported their seedlings mostly appeared fine and the extreme heat had been much harder on the trees.

The effects of flooding, however, may become clearer over time.

“Right now the seedlings look OK, but it’s whether or not the root system is strong enough to grow into that tree, and that’s what we don’t know,” Brennan said.

Quebec, Ontario and Nova Scotia lead the country when it comes to producing Christmas trees, and Brennan said farmers in those provinces have also been grappling with the effects of increasingly extreme, unseasonable weather.

Brennan said she has spoken with tree farmers from across southwestern Ontario and the Greater Toronto Area, some of whom told her they lost upwards of 40 per cent of their crops as they didn’t receive rain between May and August this year.

Christmas tree farmers are no strangers to drought, Brennan added.

“Drought is part of farming,” she said. “Mother nature is a silent partner in any farming commodity, whether it’s Christmas trees or whether it is corn.”

The difference, Brennan said, is the extreme, unseasonable nature of recent droughts and other climate-related events, including intense late-spring frosts in Nova Scotia in 2018 followed by eastern Ontario and western Quebec in 2020.

Brennan said she expects more tree farmers will start planting seedlings in both spring and fall, when they would normally favour planting in one season.

Climate change is not the only factor challenging farmers and threatening Canada’s stock of real Christmas trees, which has been declining for several years.

Since the trees take about a decade to reach the desired size, the closure of tree farms in Canada and the United States during the 2008 recession is now being felt.

The closures have continued since then. Data from Statistics Canada shows the total area of Christmas tree farms shrunk by nearly 20,000 acres between 2011 and 2021.

The average age of a tree farmer is between 65 and 85 years old, and younger generations aren’t entering the sector as longtime farmers retire, Brennan noted.

Hamelin said the high cost of land and competition with crops that yield revenue more quickly than festive trees may also be inhibiting factors for the sector in B.C.

He pointed to some options that could help Christmas tree farmers weather the effects of climate change, including genetically selecting and breeding the strongest trees among classic Canadian speciesor importing different species from parts of the world where fir trees are better adapted to sweltering heat, such as Turkey.

The plantation-like approach to Christmas tree farming is also “completely unnatural,” leaving seedlings and young trees exposed to the sun, he said.

Christmas tree farmers could consider letting some trees grow taller, or planting seedlings in areas where more mature trees could provide some shade, he said.

“I think there are some solutions, we just need to scratch our head and realize that things are different, and in the future we just need to change the way we do things.”

This report by The Canadian Press was first published Dec. 11, 2022.

Anyone can read Conversations, but to contribute, you should be a registered Torstar account holder. If you do not yet have a Torstar account, you can create one now (it is free)

Conversations are opinions of our readers and are subject to the

Code of Conduct. The Star does not endorse these opinions.