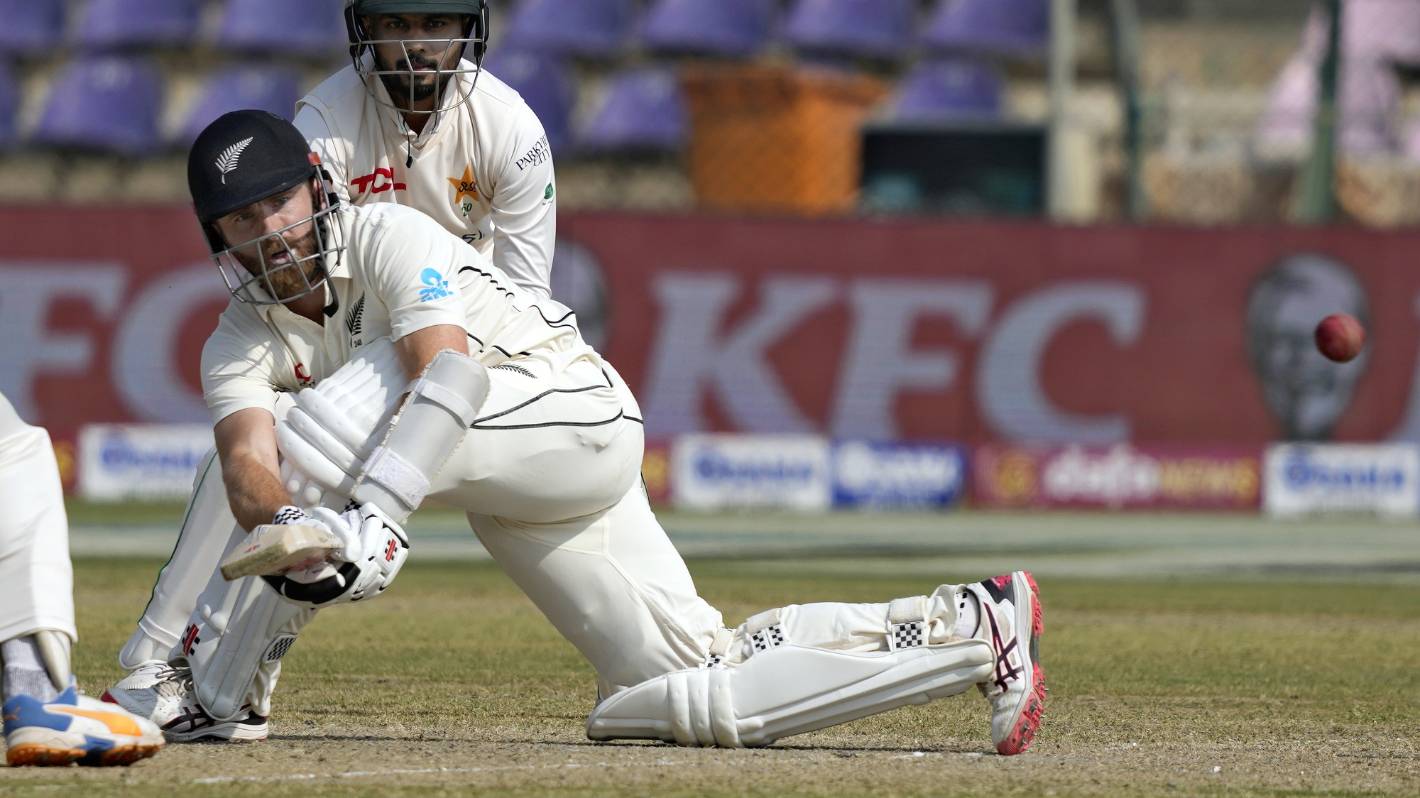 Tom Latham and Kane Williamson hit centuries for NZ on day three of the first test against Pakistan.

Just weeks after stepping down from captaining the test side, Kane Williamson reminded everyone that he remained the most important player for the Black Caps.

Williamson’s 25th test century guided them to a first-innings advantage of two runs with four wickets in hand with two days remaining in the first of two tests in the series against Pakistan in Karachi.

It was the 32-year-old’s first ton away from home in four years and helped New Zealand reach stumps on Thursday morning (NZ time) on 440-6.

In his first match under the guidance of new test skipper Tim Southee, the former captain rode his luck early to end the day unbeaten on 105 after facing 222 balls and hitting 11 fours.

Only the skinniest of inside edges saved Williamson from perishing leg before to Abrar Ahmed when on 13 from 48 balls. He was given out but instantly asked for a second opinion via DRS, which allowed him the reprieve.

New Zealand’s Kane Williamson sweeps on his way to a century against Pakistan during the third day of the first test in Karachi.

Sarfaraz Ahmed missed a difficult leg-side stumping chance very shortly after, and then a far easier opportunity to remove Williamson when New Zealand’s most prolific test century-maker was only on 21 and the tourists 249-2.

Among the surfeit of sweeps against the spinners were a collection of lofted straight drives to keep the scoreboard ticking over.

Devon Conway and Tom Latham combined for a big unbroken first-wicket partnership on day two of the first test versus Pakistan.

Daryl Mitchell played his part, hitting seven fours and a six in his 42 from just 47 balls. Positive from the outset, he hit four boundaries in as many balls off Mohammad Wasim soon after Sarfaraz had switched to pace with the second new ball.

The Black Caps tallied 70 runs in 10 overs during the middle session – including nine fours and a six in the 41 balls after Henry Nicholls (22) departed and scored at exactly four an over in that session.

Mitchell now requires 17 in his next innings to share the record as the fastest New Zealand player to reach 1000 test runs with Devon Conway, who passed that mark late on day two.

Wicketkeeper-batter Tom Blundell – who provided the bulk of the runs alongside Mitchell in New Zealand’s 3-0 series defeat in England earlier this year – also had his share of good fortune before falling for 47 late in the day, with Michael Bracewell following him soon after to blunt some of NZ’s edge.

In the opening session, Tom Latham brought up his 13th test century – no opener has made more centuries for New Zealand, with Latham previously tied on 12 with John Wright.

Having lost opening partner Conway eight short of his own century prior, Latham reached his ton with a quick single after some shaky moments in the 90s at the Karachi National Stadium

Only Williamson, Ross Taylor (19) and Martin Crowe (17) have scored more tons for New Zealand in tests than the 30-year-old Cantabrian, playing his 69th match.

The pair of left-handers were 17 runs short of registering just the sixth double-century stand for the opening wicket for New Zealand in tests.

It was also New Zealand’s joint second-highest partnership for any wicket against Pakistan in tests in Pakistan. Robert Anderson and Mark Burgess also made 183 for the fifth wicket in Lahore in 1976, while the record remains the seventh-wicket stand of 186 between Richard Hadlee and Warren Lees in Karachi in 1976.

Big moment Missed opportunities for wickets have played a major part over the three days.

Babar Azam added 149 runs after being dropped by Daryl Mitchell on day one, allowing the hosts to compile a strong first innings total.

Williamson benefited from missed stumping chances when on 15 and 21 on day three and ensured Pakistan would pay for their sloppiness, with the eventual total of the damage still yet to be calculated.

Best with the bat Williamson may have scratched around initially, but as the day wore on, you sensed Pakistan’s bowlers were growing increasingly frustrated at their limited chances of removing him.

He grew greater assured in his defence, was wristy through the leg-side to anything drifting into middle and leg stumps, and often when seemingly troubled would dance down the track a ball or two later to hit the despairing bowler over his head for four.

New Zealand’s Tom Latham celebrates after scoring a century during the third day in Karachi.

Best with the ball Nominating a standout bowler when the opposition ends the day 440-6 is akin to choosing your preferred method of torture.

Of the two spinners who have wheeled down 99 overs over the past day and a half, left-armer Nauman Ali had one wicket less than Abrar but was the better overall.

Big picture There were moments when conditions appeared far more treacherous than the first two days, with deliveries keeping low, and spitting out of the rough.

They were intermittent and not enough yet to suggest batting will become far more taxing on day four – yet – but all possible results remain in play.