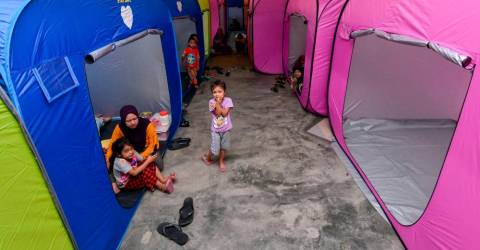 Timber KUALA LUMPUR: Up to 59,792 people were at relief centres this evening in five flood-hit states although the number of evacuees in Terengganu, Kelantan, Johor and Pahang saw a drop and that in Perak remained unchanged from the morning tally.

In Terengganu, where the number of evacuees is the highest among the states, 33,942 people from 9,739 families were at the 256 relief centres in all the eight districts – Kemaman, Besut, Dungun, Hulu Terengganu, Setiu, Kuala Nerus, Kuala Terengganu and Marang, according to the State Disaster Management Committee.

The number had dropped from 36,231 this morning.

In Johor, the number of evacuees at two relief centres in Segamat dropped by two to 46.

Relief from the floods does not seem to be coming anytime soon for the Malaysian Meteorological Department has forecast incessant rain up to tomorrow in the districts of Segamat, Batu Pahat and Pontian.

In Pahang, the State Disaster Management Committee Secretariat reported a drop in the number of evacuees to 23 at the relief centre at Sekolah Kebangsaan Sungai Ular in Kuantan this evening, down from 35 this morning.

Meanwhile, the Department of Irrigation and Drainage reported that Sungai Pahang in the Pekan district, particularly in Kuala Sungai Chini and Paloh Hinai, as well as Lubuk Paku in the Maran district, had breached the warning level.

In Perak, only one relief centre remained open this evening, at Sekolah Kebangsaan Sungai Tiang Darat in Bagan Datuk, with 26 people from 12 families.

A spokesman of the State Disaster Management Committee said Sungai Bidor in Changkat Jong, Hilir Perak, had breached the normal level of 2.82 metres but remained below the alert level. – Bernama