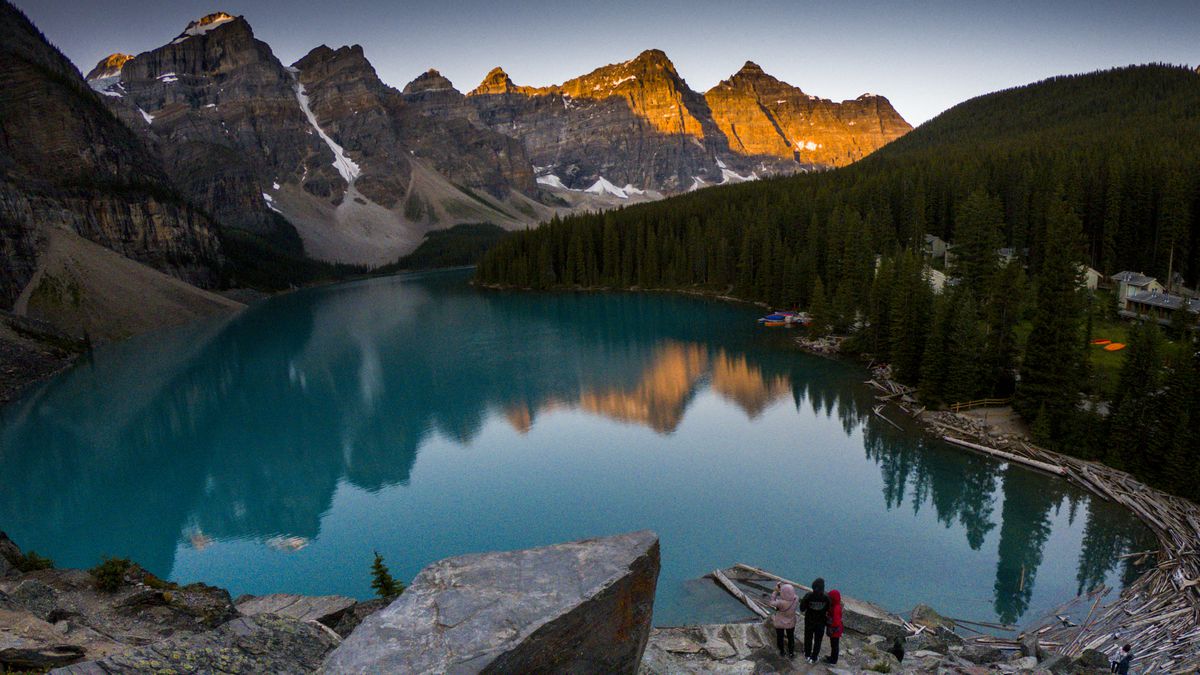 Tree species Parks Canada staff and users of the site say Moraine Lake has seen an explosion of visitors in recent years. One professional photographer attributes this in large part to social media, where users frequently share photos of the site.Jeff McIntosh/The Canadian Press

The water of Moraine Lake in Alberta seems to have been poured straight from the heavens – or at least that’s how the website for Tourism Banff & Lake Louise describes it.

In photo after photo of the popular tourist destination shared online – newly married couples embracing, dogs posing in the grandeur, influencers in curated outfits gazing out to the horizon – the glacier-fed lake glistens so vividly it looks more like a digital backdrop than a natural wonder.

But the still beauty and calm water belie the reality of a place so inundated with people that traffic now far surpasses the capacity of the area, a situation Parks Canada officials say is increasingly disruptive to wildlife and dangerous to both the natural environment and the people managing it.

The situation reached a tipping point last summer, as vehicles flooded into the area around Lake Moraine at a rate of one every two seconds, with an estimated 5,000 vehicles having to be turned away per day. Jed Cochrane, a visitor experience manager for Parks Canada, says the 100-car parking lot was full around the clock last summer, at capacity even in the middle of the night. Lines formed quickly, sometimes backing up onto the Trans-Canada Highway.

“It is a complicated and complex problem to try and solve the challenges we’re having with respect to visitor demand,” Mr. Cochrane says.

To deal with the situation, Parks Canada has announced private vehicles will no longer be allowed at Moraine Lake starting this year. Under the new rule, the site will only be accessible to shuttle buses and registered commercial vehicles. People with disabilities will be able to drive in private vehicles with government-issued permits. Travellers can also make the 14-kilometre journey from Lake Louise by foot or bicycle.

“It’s not a decision that we’ve come to lightly, and the reason we got there is just the sheer number of people that are trying to access Moraine Lake in a private vehicle,” Mr. Cochrane says. “We just cannot accommodate all of them. In fact, we could only accommodate a very small percentage of them last summer, and what that causes for visitors is frustration.”

News of the change burbled through social media on the weekend, as people whose bucket lists, hiking habits or businesses will be affected considered what it would mean to them. While many people acknowledged that traffic had become an issue, others expressed concerns that shuttles currently don’t run overnight for those wishing to shoot photographs or start hiking early, or allow large dogs or canoes.

“It’s huge for everybody,” says Marcin Karpowicz, who owns BDFK Photography with his partner, Barbara Dorota. Mr. Karpowicz estimates they do 30 to 40 sunrise photoshoots with engaged couples and newlyweds at Moraine Lake every season.

“I don’t blame Parks Canada, because sometimes the situation was really intense. I admire those people on the gates, because there was a lot of arguments, who can go and who cannot,” Mr. Karpowicz says, adding that he saw “a lot of angry tourists” last year. “I think any decision will be difficult, because you can’t make everybody happy.”

Mr. Karpowicz says he’s witnessed the explosion of visitors to Moraine Lake in recent years, something he attributes in large part to social media, where the highly Instagrammable scene is shared so often it has become instantly recognizable.

Parks Canada had already been strongly urging people to take shuttles – a post from the Banff National Park Facebook page advised visitors to: “Take transit, take transit … did we mention take transit?” – but Mr. Cochrane says he hopes the ban on private vehicles will make it clearer that people need to make transportation plans. He says this will not only improve people’s ability to reliably visit the site, but hopefully eliminate the frustrations of people who make long drives only to be disappointed.

He says Parks Canada has taken direction from practices in other locations, especially the United States, where relying on shuttle service in tourist destinations and national parks is standard and expected, something he says is “just a little bit ahead of us in terms of understanding that that’s the way to see some of these popular spots.”

Mr. Cochrane says people have valid questions and concerns about the change to traffic and what it will mean for their plans, but he notes a large number of visitors were already highly frustrated, showing up after long journeys with their dogs or canoes or photo equipment in tow – or with plans for a day’s hike – only to be turned away. He says it was not unusual for agitated visitors to clash with staff, and that he’s personally been spit on in his uniform.

He says he hopes that private companies will step up to fill some of the niche needs created by the change, including offering shuttles that accept big dogs and carry canoes, and others that run very early for those wanting to see the sunrise or get an “alpine start” in the dark to their hike. Parks Canada shuttles will run to Moraine Lake four times an hour from 6:30 a.m. to 7 p.m., at a cost of $8 or less for adults and no charge for children and youth.

Byron Fichter, a fine art landscape photographer from Saskatchewan, says he travels to Moraine Lake a couple of times a year, drawn by what he calls “by far one of the most beautiful natural landscapes you can visit.”

He says in the past six years he’s seen the area get steadily busier, and in recent visits has gone around 10 at night and slept in his vehicle to be able to catch the sunrise the next morning.

“You go there at 3 or 4 in the morning, it would be packed full of mostly all photographers or hikers,” he says.

He says people especially want to be there at sunrise and sunset, and that it’s unfortunate if those opportunities are curtailed. But he says getting the shots at Moraine has always taken effort, and that people will have to turn to different spots, or find other ways to make it work.

“I can tell you, I’m extremely thankful that I’ve made the effort in the past,” he says.

Banning private vehicle traffic to Moraine Lake is part of a bigger issue. Mr. Cochrane says a plan is being developed to establish the capacity of the area, allowing as many people as possible to access the space, while protecting wildlife and natural areas, and considering other aspects of maintaining the site, such as capabilities for trucking out human waste.

Mr. Karpowicz and his partner are planning to offer sunrise photo shoots at Moraine Lake this summer, with the option of electric bicycles for couples willing to leave in the middle of the night and make the 14-kilometre trek to the sparkling lake.

“That’s not going to be for everybody,” he says. “But it’s going to be more adventurous.”

Editor’s note: A previous version of this story incorrectly said there is a 900-car parking lot at Moraine Lake. In fact, it is a 100-car parking lot that, when full around the clock, accommodates about 900 cars per day .