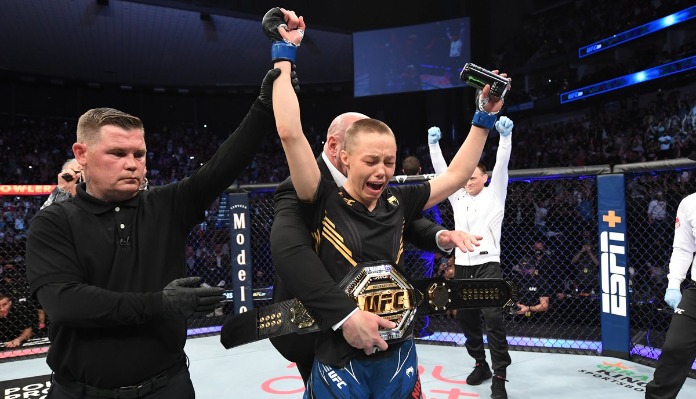 ‘Thug Rose’ has been out of action since her rematch with Carla Esparza in May. Their first meeting seven years previous saw ‘Cookie Monster’ dominate to become the inaugural strawweight champion.

At UFC 274, the wrestler made it 2-0 in the series and became the new 115-pound titleholder. Granted, it wasn’t the most exciting fight, as both women did little to nothing for five rounds. Nonetheless, it was Esparza who got her hand raised by split decision.

That bout was Rose Namajunas’s most recent to date, as she’s not booked to return to the octagon. The former champion has seemingly enjoyed her time away from the cage. Namajunas appeared in a Fight Pass documentary about her life, as well as did a photo shoot with Victoria’s Secret.

The former titleholder is now slated for her return, albeit, not to the cage. On Twitter, Cage Fury Fighting Championships announced Namajunas will headline their event on December 30th. ‘Thug Rose’ is expected to face Gillian Robertson in the headlining grappling match.

Image Credit: UFC Canada on Twitter
‘The Savage’ also competes under the UFC banner, but at 125 pounds. Having been in the promotion for over five years, Robertson is coming off a victory over Mariya Agapova in September. The Canadian currently holds the most submission wins in UFC women’s history.

The battle between Rose Namajunas and Gillian Robertson is far from the only one on the Fury Pro Grappling 6 event to feature UFC talent. The co-main event features Chase Hooper taking on Clay Guida, while other notable names such as Ovince St. Preux, Alex Caceres, and Eryk Anders will also compete at the event.

What do you make of this news? Are you excited about the grappling event? Sound off in the comment section below PENN Nation!