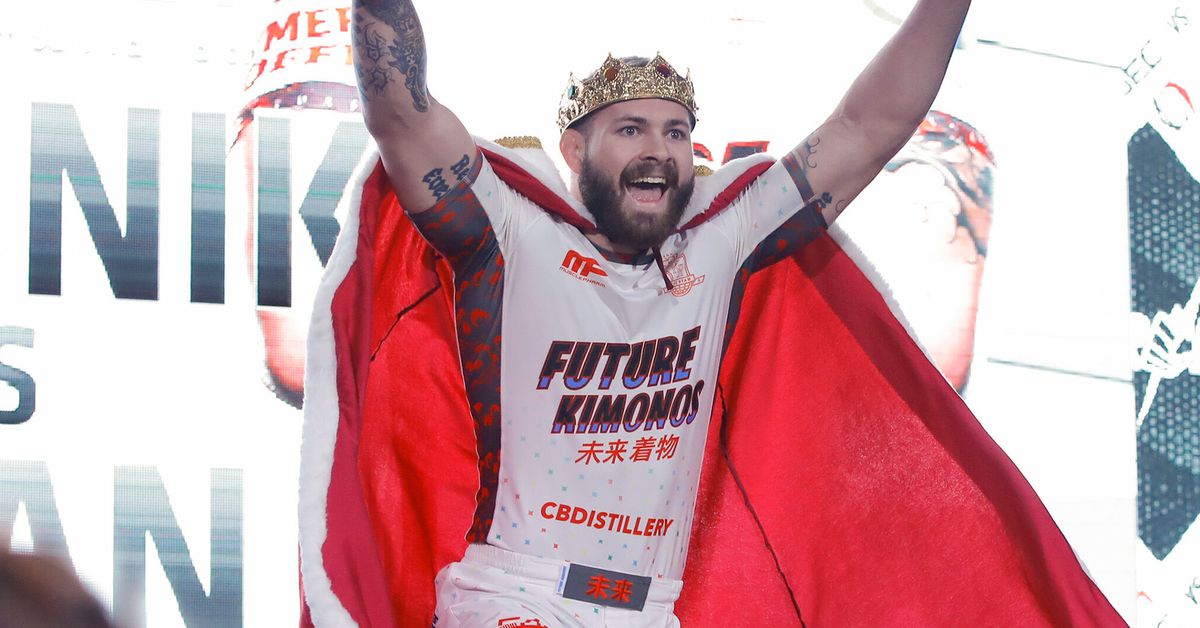 Earlier this month, Ryan took on Nicky Rodriguez at the UFC Fight Pass Invitational 3 in a rematch of an ADCC bout from September that saw Ryan win by heel hook. This time, Ryan won a hard-fought victory based on escape time in overtime, notching his 44th win in a row in grappling competition. But what makes the victory even more impressive is that just 24 hours beforehand he was rolling around with two of the strongest men in the world.

The day before his match with Rodriguez, Ryan did some live rolling with the 2018 and 2019 World’s Strongest Man winners, Hafthor Björnsson and Martins Licis. Ryan is widely considered to be one of, if not the best grappler in the world at the moment, and at 6-foot-2 and over 200 pounds, he’s not tiny. But speaking this week on The MMA Hour, Ryan admitted it was probably not the wisest decision.

“Probably the dumbest and most risky career choice I’ve ever made, because it was the day before I was supposed to compete, and I was like, man, if I get hurt, [coach] John [Danaher] is going to kill me,” Ryan said. “So I told them I wasn’t drilling with them. I taught them a private before and I’m like, ‘I’m not drilling with you guys, you’re too big.’ Then the camera guy is like, ‘You guys want to roll?’ So I look around, we had just finished training, it was the day before competition, I look, see John is nowhere to be found, and I’m like, ‘Let’s do a quick one.’

“So I trained with them, and Martins actually used to wrestle so he has some good instincts. He has a good base, he’s hard to sweep, he’s super strong, he’s a lot more compact than Thor. Thor’s a lot bigger and longer. Obviously, just the strongest guys you’re ever going touch from every position, but believe it or not, the mechanics and the body position mean a lot more than the overall strength. When you have misplaced strength, you tend to not feel as strong as you are. I’ve trained with so many guys who are so strong in the gym, but they feel like children on the mats. It’s very weird how it translates. These guys are obviously strong in the gym and strong on the mats because they’re just so strong, but I’ve trained with bodybuilders before, and without the body positioning, it’s hard to really feel strong.

“But it was a great experience because I didn’t get hurt, thank God, and it ended up paying off: I got a bunch of Instagram followers. So my risk to reward was correct for this one.”

A multiple-time world champion and undefeated since 2018, Ryan has become the face of submission grappling over the past couple of years. As such, “King” Ryan has spoken about feeling a sense of duty to help “push jiu-jitsu over the hump into the mainstream.” In that vein, Ryan said he’s already spoken to his new friends about getting them more involved in the art of jiu-jitsu, in a way that would elevate the sport.

“They’re just awesome guys,” Ryan said. “They’re super, super strong, especially Martins, who has a very good base, is hard to deal with. So now I’m trying to convince them to do six months of training and do another jiu-jitsu match with another strongman, because that would be great for the sport.”

While Licis has not competed outside of Strongman events, Björnsson is not new to the combat sports world. The man who played “The Mountain” in Game of Thrones has also dabbled in professional boxing, most notably winning a unanimous decision over fellow Strongman Eddie Hall in March, meaning Björnsson could be open to expanding his horizons further still with a grappling competition.

But even if nothing comes of it other than his many new Instagram followers, Ryan says at the very least he finally has a definitive retort to the trolls who plague him.

“This is now perfect for me because whenever I get into an argument with an idiot who is like, ‘I’m just to strong for that s*** to work on me,’ I can be like, ‘Well, I literally grappled the strongest person on the planet, and I can assure you that it worked.’”