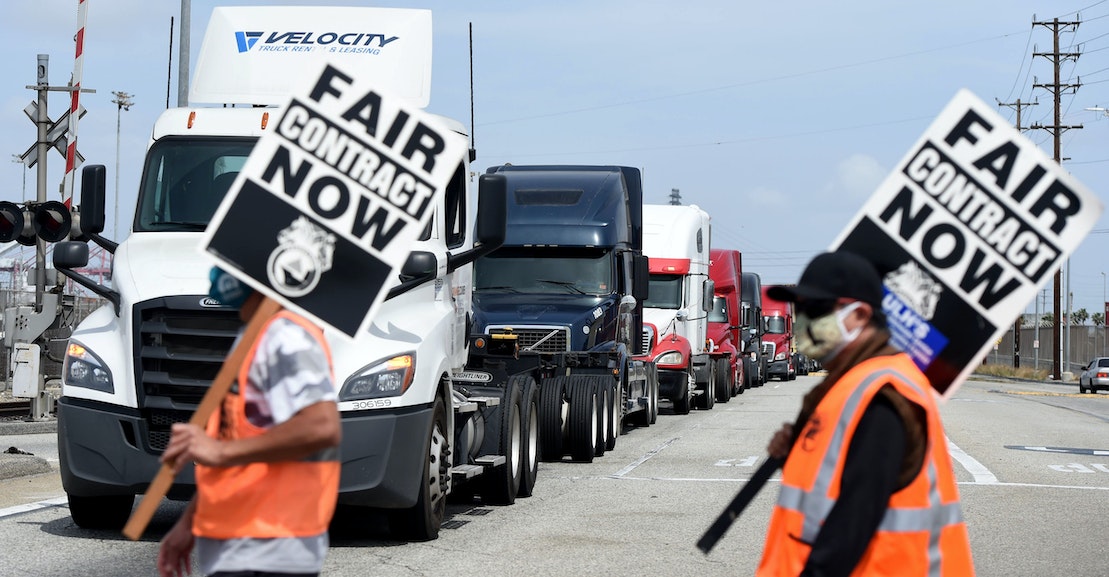 After decades of decline, labor unions have enjoyed a new burst of energy and enthusiasm over the last few years. 2022 saw the most new National Labor Relations Board elections—votes by workers to unionize their workplaces—since 2005 and the highest rate of successful elections in more than two decades. Major companies like Amazon and Starbucks are fighting tooth and nail to halt unionization drives, but polls show that roughly two-thirds of Americans now support unions—a roughly 20-point rebound since the Great Recession.

The Supreme Court doesn’t share this enthusiasm, however. In recent years, the court’s conservative majority has handed down high-profile rulings to curb the power of public-sector unions and make it harder for farmworkers to organize on company property. Now the justices will hear a case this week that could tip the legal balance even further in favor of companies by giving them greater latitude to sue striking workers for damages.

Glacier Northwest v. International Brotherhood of Teamsters began with a contract dispute in Washington state. Glacier Northwest makes and distributes custom batches of concrete for customers in the Pacific Northwest. Mixing concrete is a highly time-sensitive business: Once the ingredients are combined, the company told the justices, it triggers an “irreversible chemical reaction” that inevitably results in hardened concrete. “Moreover, if concrete remains in the truck’s mixing drum for too long, it will harden and damage—even destroy—the truck,” the company said.

In August 2017, the company and its union-represented drivers had reached an impasse in collective bargaining negotiations. The drivers initiated a work stoppage one morning while some of them were in varying stages of the concrete delivery process. Those who had concrete in their trucks returned to Glacier’s facilities and left the mixers running. Nonunion employees at Glacier then emptied the concrete mixes into a makeshift structure where it could harden, which also rendered it useless.

The exact motive behind the work stoppage is somewhat disputed. In its brief, the union says its representative had “instructed the drivers to keep their trucks running, thus leaving the drums rotating and delaying the hardening process.” The Teamsters also say that multiple drivers reached out to Glacier supervisors for instructions before the stoppage. Glacier, on the other hand, accused the union of persuading workers to “‘intentionally sabotage’ Glacier’s business operations and destroy its property.” None of the vehicles were damaged during the stoppage, though the company did lose an unspecified quantity of mixed concrete along the way.

Glacier sued the Teamsters in Washington state courts for allegedly working to intentionally destroy the company’s property. A state district court rejected those claims by citing the federal National Labor Relations Act, which generally preempts lawsuits between management and organized labor in favor of resolution by the National Labor Relations Board. That would include most lawsuits, the court reasoned, for alleged destruction of property during the course of a labor dispute, even if done intentionally.

The Washington Court of Appeals reversed that decision, however, and held that the lawsuit fell under an exception to the general rule of NLRA preemption. The local-interest exception applies in cases where the litigation is over something of serious interest to local authorities, like violence or destruction of property. The court of appeals rejected the lower court’s ruling that the loss of the affected concrete was just “incidental” to the legally protected work stoppage, apparently siding with the company’s interpretation of events. But that decision was itself overturned by the Washington Supreme Court, which held that NLRA preemption applied.

Glacier asked the U.S. Supreme Court to narrowly interpret a 1959 decision on when companies can sue unions in state courts. In San Diego Building Trades Council v. Garmon, the high court held that the NLRA generally overrides state-level litigation between companies and unions in most circumstances. The court held that this preemption was an implied feature of the NLRA’s structure as well as necessary to the federal law’s goal of peacefully managing labor disputes.

“To leave the states free to regulate conduct so plainly within the central aim of federal regulation involves too great a danger of conflict between power asserted by Congress and requirements imposed by state law,” Justice Felix Frankfurter wrote for the majority. At the same time, the court acknowledged two areas where this preemption did not apply. One would be if the litigation involved a “merely peripheral concern” of the NLRA. The other, which is central to Glacier’s case, is if it involved matters “deeply rooted in local feeling and responsibility” where Congress did not intend to interfere.

Glacier wants the court to expand that local-interest exception to cover what it says was an intentional effort to destroy property. “It cannot reasonably be inferred that Congress intended to displace traditional state-law remedies for employers whose property is tortiously destroyed, especially because the NLRA itself provides no substitute compensatory remedy,” the company argued. “By default, the states have both the power and the responsibility to protect property within their borders, and the local-interest exception ensures they can do so.”

The Teamsters counter that the existing process, in which the NLRB first determines whether the exception applies to a specific allegation, is a better reading of the law. The union defended the workers for taking the appropriate steps to ensure that their trucks wouldn’t be damaged by their actions. “[They] promptly returned the delivery trucks to [Glacier’s] care, with the drums still rotating to prevent the concrete from prematurely setting,” the Teamsters noted. “After investigating those facts, the NLRB’s General Counsel determined that federal labor law protected the work stoppage.”

To that end, the Teamsters also sharply criticized the company for what they suggested was a deceptive portrayal of events. “[Glacier]’s argument to the contrary turns entirely on the label ‘intentional property destruction,’ variants of which it incants more than sixty times in its forty-nine-page brief,” the union argued. “But that phrase is misleading. This case is not about an act of vandalism that happens to take place during a strike—something no one argues is protected by federal law. It’s instead about whether merely stopping work can result in financial liability for any spoilage of perishable products that may follow. It cannot.”

If the Supreme Court sides with Glacier, companies will have more discretion to sue striking workers for purported financial losses they incur during a strike, which in turn could have a significant chilling effect on strikes and work stoppages in general. That would fit within the conservative majority’s broader trend of hostility to labor rights in major cases like Janus v. AFSCME, where the justices ruled that free-agency fees levied by public-sector unions violated the First Amendment, and Cedar Point Nursery v. Hassid, where they struck down a California state law that allowed union organizers onto farm owners’ land during certain nonworking hours.

The court could also strike a compromise of sorts that was laid out by the Biden administration in a friend of the court brief. The Justice Department argued, as a procedural matter, that the Washington state courts should have sided with Glacier, claiming that the court was bound to accept the company’s version of events as true at the dismissal stage. But it also argued that if the Supreme Court sides with Glacier and sends the case back to the Washington state courts for reconsideration, those courts should rely on the results of the NLRB investigation when considering the factual circumstances of the case. Oral arguments on Tuesday may shed more light on the justices’ preferred path, and a ruling is expected by the end of June.