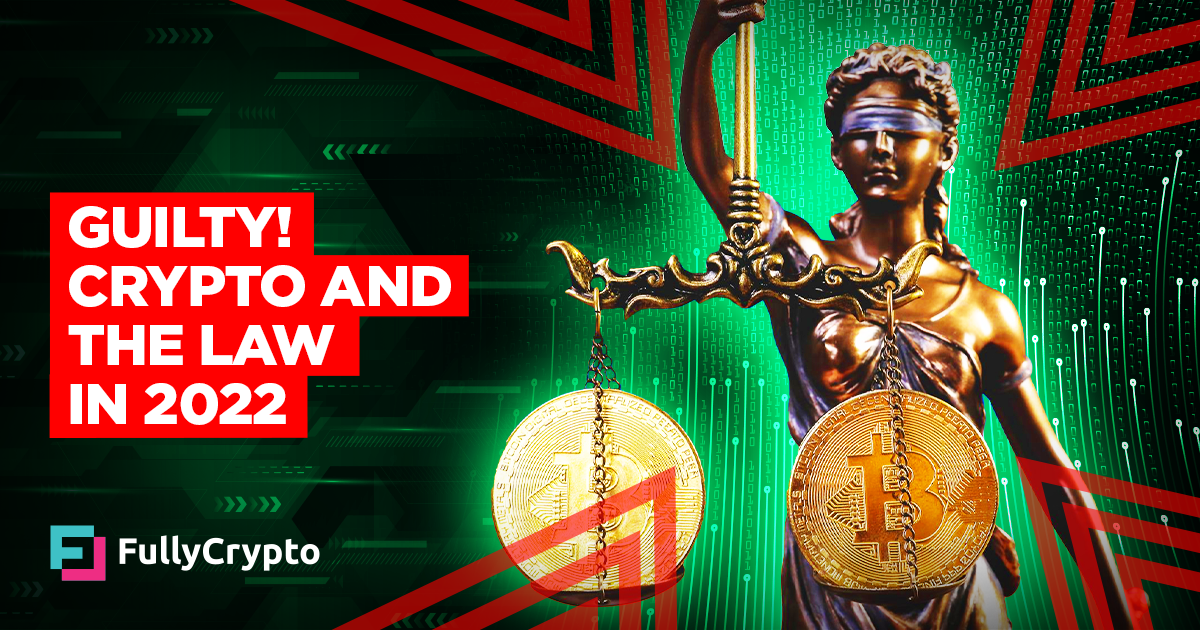 As usual in the crypto space we saw a plethora of legal cases on a variety of issues, from being served by NFT to Craig Wright’s reputation going (further) down in flames. But what were the most interesting legal developments of 2022?

Craig Wright’s Libel Journey Goes South
Craig Wright has two entries in this year’s list, such has been his legal hit rate this year. In 2019, Wright sued a plethora of individuals who perpetually called him a fraud – Adam Back, Vitalik Buterin, Roger Ver, Peter McCormack, and Twitter user Hodlonaut. The first three cases lapsed, leaving Wright battling the other two.

The McCormack case ended in ignominy in August when Wright pulled almost all his allegations on the eve of the trial after it was discovered that he had lied about being rejected from conferences on the back of McCormack’s name calling.

Wright technically won the case, but was awarded just £1 of the £100,000 he was seeking, with the judge saying that he relied on a “deliberately false case and evidence” for three years.

Wright then went to Norway to face Hodlonaut, where he lost, with the judge saying that none of the evidence he presented (most of which was dismissed as the usual hodgepodge of forgeries and manipulations) was strong enough to change the “prevailing view” that Wright was not Satoshi Nakamoto.

Wright faces Hodlonaut in the UK over the same issue next year.

Crypto Litigation Comes to NFTs and DAOs
Two startling legal developments took place this year, both involving the means by which litigants can serve defendants.

In July, the director of an online gambling company was given permission to use an NFT drop to serve legal papers on two individuals who he said had scammed him. The two men were only known to the victim by their cryptocurrency wallet addresses, which the judge said the perpetrators were likely to check on a regular basis.

This was followed by a case in the U.S. where the United States Commodities Futures Trading Commission (CFTC) was told it could serve members of the Ooki decentralised autonomous organisation (DAO) with a summons through online communications, such as a chat box or forum.

Such means were necessary because of the decentralized nature of the Ooki operation, and set a potentially concerning precedent for future DAO enterprises.

EU Parliament Clamps Down Hard on Crypto with MiCA
European lawmakers this year introduced the toughest regulations yet seen in the crypto space, and nearly killed Bitcoin trading into the bargain. It had been known for some time that many lawmakers were in favor of banning proof-of-work cryptocurrencies from being traded in the bloc, and a vote on the matter was squeezed into a March session at the last minute.

The proposal was beaten 32-24, which essentially kicked the matter off the legislative agenda, but several other huge changes became law through the Markets in Crypto Assets (MiCA) framework and the implementation of the Financial Action Task Force’s (FATF) ‘Travel Rule’.

Once the rule changes are ratified next year, it will no longer be possible for anyone to send cryptocurrency from a non-custodial wallet to a custodial wallet or exchange without first handing over their personal information to the custodian in question, regardless of whether they are a customer or not.

On top of that, the company behind the wallet or the exchange receiving the funds will have to verify the information first, meaning some transactions may not go through if they don’t deem the sender as being legally sound.

This rule was implemented after a proposal to impose KYC on all crypto wallets, be they custodial or non-custodial, did not pass, although it is clearly a concern for those who don’t want their data sitting on multiple servers, ready to be hacked.

2022 Was the Year of Variety
There were other notable legal events in the crypto world this year, such as LBRY losing its case against the Securities and Exchange Commission, Coinbase being hit with multiple lawsuits and one of its executives charged with insider trading and an OpenSea product manager involved in something similar which may see NFTs ruled as securities next year.

With plenty of cases set to be examined if not resolved next year, such as Ripple’s tangle with the SEC, the Bitfinex launderers set to answer for their crimes, and Craig Wright facing Hodlonaut again, we can bet that 2023 will be another bumper year for legal shenanigans.